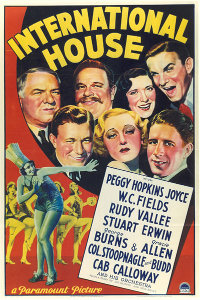 Surprisingly hard to find artwork for this; I finally found a site that had the original poster image, though I had to cut that down to size myself. Anyway, I can only presume that “the Grand Hotel of comedy”, as it was advertised back in the day, seemed extraordinarily bizarre in 1933 cos it seems exactly that way now in 2010… it did a few years ago when I first saw it on tape, and it was pleasing to be reminded of it tonight courtesy of the library’s digital copy. To say the film has a plot would indicate that there’s some sort of narrative drive, which there isn’t really; what we have is an assortment of characters converging on a hotel in Wu Hu, China, where a local scientist is giving a demonstration of a television-like device before selling it to the highest bidder; in-between you’ve got romantic complications combined with moments of quite stunning idiocy, not to mention a decidedly weird musical number about love between items of crockery, and best of all you’ve got W.C. Fields. The film is merely pretty good for the first half-hour, but once Fields makes his entrance—and what an entrance it is, too, matched only by the automotive vehemence of his exit—it suddenly moves onto another level; he quite confidently owns the rest of the film thereafter. This is one of my favourite early 30s comedies, and it held up beautifully on repeat viewing tonight. Like I said, though, it’s downright strange in many ways, and with hindsight the fact that Bela Lugosi gets to play a comic role here now looks like one of the strangest things about it.