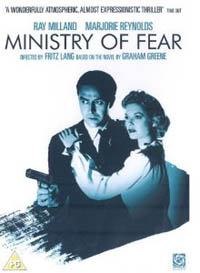 When you find yourself confined in a hospital-type environment (as I have done), the “real world” takes some getting used to again once you’re out of it. I imagine that coming out of a mental institution after two years would require even more adjustment, especially when it’s wartime and Fritz Lang is directing. The real world for Stephen Neale accordingly comes across as a stranger place than it otherwise might, getting off to a decidedly odd start at a village fete where he wins a cake at a guess-the-weight stall that, unbeknownst to him, contains another prize he wasn’t meant to win. The people giving out the prize seem awfully determined to get it back, whereupon cue an assortment of encounters with various people, both good guys and bad guys, who may or may not be entirely what they seem. All this could be quite Hitchcockian, but the visual style and the overall tone of the thing are something else; the uncertain nature of the people Neale encounters is one thing (Adrian Martin’s handy commentary on the Madman DVD talks about what he calls “reversible relations” between the good guys and the bad guys, in which the former are, in their own way, as ominous and threatening as the latter—cf. the shootout at the end), but it’s further enhanced by the overall tone of strangeness and unease that Lang lays over the film (which feeling doesn’t really begin to disperse until quite late in the day), which is itself at least partly a product of Lang’s visuals; it’s murky and expressionistic stuff, giving the film a sinister cast not entirely unlike some of his older German films. It’s probably not as good as those films—I mean, those first two Mabuse films are among the best films ever made in that genre—but it’s a pretty solid 86 minutes.