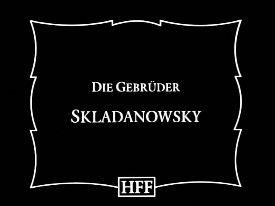 The early days of cinema is a subject that fascinates me, always has, so in spite of my usual wariness towards Wim Wenders, his film about the Skladanowsky brothers was one I wanted to see. The Skladanowskys were Germany’s contribution to the birth of cinema but, alas, not to its future; notwithstanding a few films apparently made just before WW1, they were out of the fledgling film business just as it was barely beginning to take off. Although they beat the Lumiere brothers in the race to publicly exhibit moving pictures, the Lumieres’ machine won the overall battle by simply being a lot better than Max and Emil’s Bioskop, which looks bizarrely complicated in hindsight (using two alternating strips of images that were glued together frame by frame). Wenders clearly has much affection for his subject, particularly what he calls in the DVD commentary the “un-Germanness” of the creation of the Bioskop by these isolated inventors who were kind of amateurs without the sort of industrial backing the Lumieres or Thomas Edison had. The film was produced as an exercise with students he was teaching at his old film school, and switches between interview footage of Max’s nonagenarian daughter Lucie with re-enactments of the invention of the Bioskop and the grand premiere of their little film loops at the Wintergarten; these latter scenes were shot using a hand-cranked camera from the 1920s, filmed at “silent speed” and then step-printed to 24fps. It’s a technique which, combined with the somewhat exaggerated, occasionally bordering upon slapstick performances, adds to the overall whimsical feel of the film. I was only disappointed that, although Wenders does get to show us the actual Bioskop machine, we don’t see any of the original films. On the whole, though, I enjoyed this, and I kind of admire Wenders’ honesty in the commentary about the end credits being stretched to absurd length purely so the film would be long enough to qualify for distribution in Germany.