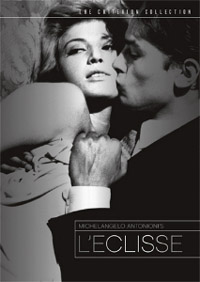 This is a film I’ve wanted to see ever since I saw it discussed in Martin Scorsese’s My Voyage to Italy, even though at that time I was still kind of iffy about Antonioni. I’ve come to at least a bit more of an appreciation in the last couple of years, though, and so I did find it an interesting experience to finally view it. I liked it, although trying to work out what to actually say about it is proving difficult. I quite like this review (even if I do find the assertion that an English dub would make the film more accessible to American viewers frankly laughable. Who’s being an elitist snob?), which draws an amusing parallel with Carnival of Souls; amusing, but also kind of instructive in that it does resonate with this film’s atmosphere of distance and alienation; Monica Vitti’s character in this film isn’t dead but she’s not exactly connected somehow to the world around her, and the world itself seems remarkably empty at times. Similarly, the story itself seems kind of disconnected from whatever’s happened before it begins, and even within the film the sense of time passing is so vague it was like watching Resnais; like Rosenbaum’s booklet essay says, it’s “nothing but narrative drift”, and although it feels linear in its development it’s hard to tell how chronologically close to each other the various scenes are. At the same time there’s still a sense of control over the material, though, you can tell Antonioni’s doing this deliberately rather than just because he doesn’t know any better. It’s kind of difficult stuff even by comparison with the two previous films in the “trilogy”, even further out there in terms of narrative looseness and even less ingratiating, though I still liked it. Think more viewings will be necessary, though.