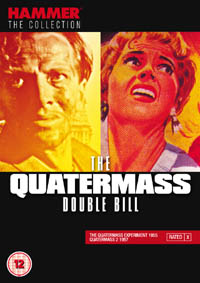 The other day I picked up the Quatermass Double Bill DVD featuring the first two Hammer adaptations of the BBC’s Quatermass TV serials, so that’s what I’ll be looking at over the next day or two… I also have the big Hammer Collection box with Q. and the Pit, so I’ll look at that when I start going through that set. Meanwhile, here we are at the beginnings of Hammer Horror… of the three Hammer films, this is obviously the hardest to compare with the TV original, as most of the latter is lost. That said, it’s obviously quite a reduction of the original, which would’ve lasted over three hours in total compared with the eighty-odd minutes of the film, though this is true of all the Quatermass films, and we do know series creator Nigel Kneale was unhappy with some of the changes made—most notably the ending—and loathed Brian Donlevy’s performance in the title role. And yet I’m not sure I share his disappointments, Val Guest was probably right about his ending working better on film, and I actually quite like Donlevy’s bluntness and science-marches-on-regardless arrogance (having just narrowly disposed of the monster his experiment in rocketry brought to Earth, what else does he do but launch another one); it’s not the same as the TV version, but it works here. By this time Hammer had a fair track record of adapting TV and radio series to the big screen as double bill programmers, and had dabbled in science fiction before, but the horror angle here was new for them, and the money it made at the box office (remember the original series had been a major hit too, and the release of the film was nicely timed to just precede the broadcast of the second series) obviously convinced them it was a direction to pursue further. A splendid example of a basically well-made B thriller, nice to see this again.