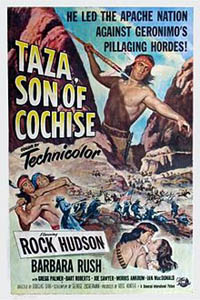 Douglas Sirk is one of those filmmakers who I know are widely admired by critics and all that, but who I’ve somehow never really been able to summon up enough interest to actually explore, and my one prior attempt to engage with him (Written on the Wind) was not a particularly happy one. Still, I’ve got some of his films from the library, and I thought I’d start with what is arguably his most atypical film (albeit the film he once claimed was his favourite), i.e. his only western… a 3D western at that. Obviously the DVD I watched tonight was flat, but it was easy enough to imagine in 3D, I could see quite easily what the gimmick shots were (though they’re not too offensively “out there”). As for the story, well, Cochise had a son called Taza and that’s where the film’s historical accuracy seems to end; in the film Taza pursues his late old man’s policy of peace with the white man, to the extent of wearing the white army’s uniform as part of his “reservation police” duties, but faces resistance from his brother Naiche (who’s still all about fighting the power) and the mistrust of some of his white “superiors”. When the infamous Geronimo is captured and left on the Apache reservation, it can only mean further trouble, which it does in short order. Curious film, which I wouldn’t call “reactionary” like one IMDB commenter does, it’s not really anti-Indian, yet its sympathies for the latter do seem limited to Taza, who is, after all, on “our” side. The DVD transfer was also fairly middling, which didn’t help it much; obviously it’s atypical Sirk, like I said, but it could’ve been an interesting look at how he used all-natural locations and colour rather than studio artifice if only you could’ve seen them better. A pretty ho-hum experience, all things considered.