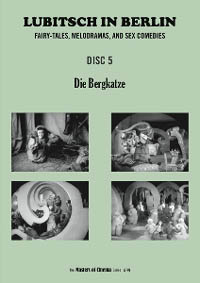 The last film in the set finds Lubitsch back on comic ground, and provides further evidence that he was right to focus on comedy rather than big costume drama. Pola Negri’s in this one again, given a comparatively rare chance to play comedy rather tragedy, as Rischka, the titular “Bergkatze”, the daughter of a band of robbers pestering a fort in the snowy mountains of a possibly non-existent land. A certain “dashing” lieutenant Alexis has been sent to the fort as punishment (we may assume the innumerable young women who turn up to his send-off, along with the equally innumerable children crying for their daddy, are at least part of the reason why); he’s waylaid by the robbers, Rischka falls head over heels for him, but when he eventually gets to the fort, the commandant offers him his daughter’s hand in marriage if he wipes out the robbers. Complications ensue, obviously, especially when Alexis signally fails in his appointed task but the commandant thinks he’s actually won the battle rather than lost it… Apparently this was a notorious flop for Lubitsch, which is hard to imagine these days, but he suspected German audiences (there were no foreign ones, as it seems not to have been exported) just weren’t ready in 1921 for a film poking fun at military matters (cf. more recently the fate of Gregor Jordan’s Buffalo Soldiers). Still, he apparently considered it his favourite of his own films, and it’s not hard to see why; he evidently had a lot of fun with this, from the story to the performances to the quite astounding visual elements, particularly the fort (a curvy little fantasia in a brilliant natural setting) and the fascinating use of image cropping and masking through the entire film. Indeed, I had to do something I don’t normally do and pick a few screenshots to illustrate (click to enlarge):